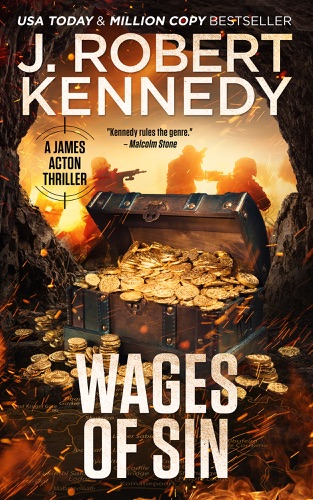 WHEN IS THE PRICE TO PROTECT A NATION'S LEGACY TOO HIGH?

Archaeology Professors James Acton and Laura Palmer are on safari in South Africa, enjoying a vacation away from the bullets and bombs that too often threaten their lives, when a chance encounter leads to a clue that could unlock the greatest mystery remaining of the Boer War over a century ago.

The location to over half a billion dollars in gold.

It’s a treasure that has claimed dozens of lives, and is about to claim even more.

USA Today and million copy bestselling author J. Robert Kennedy delivers another torn from the headlines thriller with Wages of Sin. Filled with intrigue, suspense, humor and a touch of romance, prepare to lose sleep with this action-packed adventure the likes of which only Kennedy can deliver. If you enjoy fast-paced adventures in the style of Dan Brown, Clive Cussler, and James Rollins, then you’ll love this adrenaline fueled tale of historical intrigue.
Get Wages of Sin today, and decide for yourself whether the price paid by a desperate nation was too high…

About the James Acton Thrillers:

Though this book is part of the James Acton Thrillers series, it is written as a standalone novel and can be enjoyed without having read any of the previous installments.

The James Acton Thrillers series and its spin-offs, the Special Agent Dylan Kane Thrillers and the Delta Force Unleashed Thrillers, have sold over one million copies. If you love non-stop action and intrigue with a healthy dose of humor, try James Acton today!

★★★★★ “A great blend of history and current headlines.”

With over one million books sold, award winning and USA Today bestselling author J. Robert Kennedy has been ranked by Amazon as the #1 Bestselling Action Adventure novelist based upon combined sales. He is a full-time writer and the author of over forty international bestsellers including the smash hit James Acton Thrillers. He’s married, has an adult daughter, and is likely hard at work on his next book.