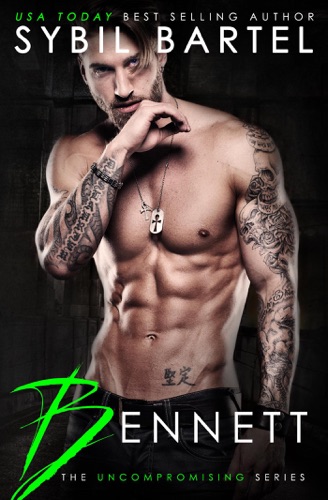 By USA Today Bestselling author, Sybil Bartel comes this heart-pounding, Romantic Suspense series of standalone books about Former Special Forces Military Operatives! Come meet the Alpha heroes who served together in combat, but are now fighting to save the women they love!

Being the drummer for the hottest new rock band should've been a dream come true. Sold out shows, women, more money than I deserved…

But I didn't want any of it.

The fame sucked, the money was a burden and I'd given up my one shot at ever having her—my best friend's sister.

I wasn't supposed to touch her. My best friend made me swear I wouldn't. Then he was deployed, and he told me to look out for her. Except being around her while still keeping my distance was slowly killing me. Touring with the band should've been the perfect escape... Until I screwed up.

I screwed up so bad, she was half-conscious in my arms, fighting for her life.

*BENNETT is the fourth standalone book in the Uncompromising Series.

Want more of the Alpha heroes in the Uncompromising series? Read the exciting, companion series, the Alpha Bodyguard Series!