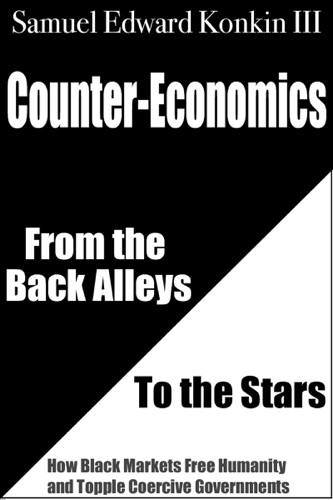 In Counter-Economics, Samuel Edward Konkin III -- the creator, premier activist, and theoretician of Agorism -- introduces the most powerful means to free yourself, protect and increase your wealth, and liberate the whole of human society in the process.

From the Introduction: "Are you reading a self-help book, a personal liberation manual, a financial advisory, an esoteric economics text, an anti-political platform, a muckraking history, a sensational exposé of underground life, or an anarchist cookbook? The answer is all of the above.

"That may sound confusing, but the main purpose of this writing is to extract unity from these topics usually unconnected in most minds today. I hope it will indeed amuse and excite the reader about another, accessible way of life, give new explanation to some of the vexing problems that beset our social life, and perhaps solve a few."

Samuel Edward Konkin III (1947-2004) was the author of the seminal works on libertarianism and agorism, New Libertarian Manifesto and An Agorist Primer. Over the course of thirty years, he wrote, edited, and published newsletters and magazines such as Laissez Faire, New Libertarian Notes, and 101 issues of the longest-running publication of its kind, New Libertarian Weekly.

Counter-Economics was intended to be his magnum opus, the distillation of all his work and research over 15 years of movement activism. Sadly, of the 18 chapters outlined, only ten were written. Of those, only six had been found at the time of publication.

“Konkin’s writings are to be welcomed. Because we need a lot more polycentrism in the movement. Because he shakes up Partyarchs who tend to fall into unthinking complacency. And especially because he cares deeply about liberty and can read and write, qualities which seem to be going out of style in the libertarian movement.” -- Murray N. Rothbard, PhD