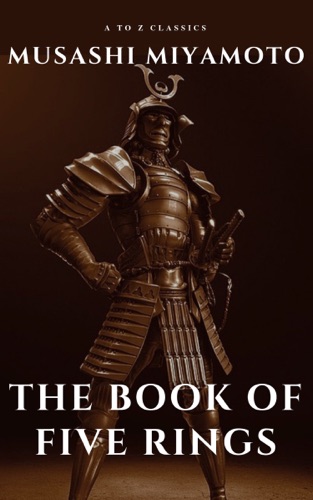 Contains Active Table of Contents (HTML)  and include a bonus link to the free audio book.

The Book of Five Rings ( 五輪書  Go Rin no Sho) is a text on kenjutsu and the martial arts in general, written by the Japanese swordsman Miyamoto Musashi around 1645. There have been various translations made over the years, and it enjoys an audience considerably broader than only that of martial artists and people across East Asia: for instance, some foreign business leaders find its discussion of conflict and taking the advantage to be relevant to their work in a business context. The modern-day Hyōhō Niten Ichi-ryū employs it as a manual of technique and philosophy.

Musashi establishes a "no-nonsense" theme throughout the text. For instance, he repeatedly remarks that technical flourishes are excessive, and contrasts worrying about such things with the principle that all technique is simply a method of cutting down one's opponent. He also continually makes the point that the understandings expressed in the book are important for combat on any scale, whether a one-on-one duel or a massive battle. Descriptions of principles are often followed by admonitions to "investigate this thoroughly" through practice rather than trying to learn them by merely reading.

Musashi describes and advocates a two-sword fencing style (nitōjutsu): that is, wielding both katana and wakizashi, contrary to the more traditional method of wielding the katana two-handed. However, he only explicitly describes wielding two swords in a section on fighting against many adversaries. The stories of his many duels rarely refer to Musashi himself wielding two swords, although, since they are mostly oral traditions, their details may be inaccurate. Musashi states within the volume that one should train with a long sword in each hand, thereby training the body and improving one's ability to use two blades simultaneously
(wikipedia)

More by Musashi Miyamoto & A to Z Classics