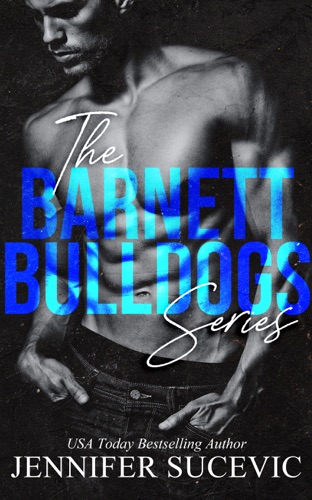 Are you ready for some football? From USA Today bestselling author Jennifer Sucevic comes four full length novels from the Barnett Bulldogs Series- King of Campus, Friend Zoned, One Night Stand, & If You Were Mine (spin-off).

King of Campus
Roan King.
The uncrowned king of Barnett University. He's like a freaking celebrity around here. People, by which I mean grown women, actually stalk him on the internet. And around campus. Apparently, he's god's gift to both football and the ladies (I'm using that term loosely). All he has to do is smile and girls fall right onto their backs before spreading their legs wide. I've heard that he's already plowed his way through half the female population at Barnett. My guess is that he'll work his way through the second half before he gets drafted to the NFL later this year.
Yeah...I don't plan to be one of them. The guy is nothing more than a conceited player. You know the type—a steroid infused meathead coasting through college on his football prowess.
Ugh.
I have three words for you—avoid, avoid, avoid.

Friend Zoned
Sam Harper is my best friend and has been since we were fourteen years old. Unfortunately, he sees himself as my unofficial big brother. Which is to say that the guy is a major cock block. I swear he has a sixth sense when it comes to me getting laid. It's frustrating how I can be on the verge of sealing the deal when Sam will appear out of nowhere, and suddenly my night is going up in a big ball of sexually frustrated flames. I think the guy enjoys messing with me. Why else would he take such perverse pleasure in doing it?
Exactly.
I'm thinking he needs a girlfriend. Someone to preoccupy him. Maybe then he'd stop trying to get in my way all the time.
Except...I'm starting to notice things about Sam that I definitely shouldn’t be noticing. Like those piercing blue eyes that pin me in place. Or his short blond hair that I want to drag my fingers through. Not to mention those killer abs that I sometimes catch a fleeting glimpse of when he stretches next to me in class.
The strange feelings that have sprung up in me are definitely starting to freak me out. I mean, we’re friends. We’ve always been just friends. And I don’t want that to change.

One Night Stand
Liam
The moment she stepped foot through the door, she was on my radar. How could she not be? The woman is absolutely gorgeous. Thick, inky black hair and a sweetly curved body. Although I have to admit, this hole-in-the-wall dive bar doesn't exactly seem like her scene. For one, she's wearing too much clothing. Two, she's shooting down every guy that sniffs around her table like it's her sole mission in life. Casualties are scattered across the beer-stained floor as we speak. And three, my guess is that she's a little older than the usual college-aged crowd that hangs out here looking for a hookup to stumble home with at the end of the night.
After a careful assessment of the situation, my current plan of action is to keep my sights firmly locked on the target as I bide my time nursing a beer. Luckily, it doesn't take long for some drunken idiot to give me the perfect opportunity to step in and run interference.

If You Were Mine
Know what happens when you don’t bother dating all through college because you’re much too busy trying to stay on top of your classes?
I’ll give you a little hint…
It starts with the letter V and ends with irginity.
Ding, ding, ding… nailed it.
Well… at least something got nailed. Because it certainly wasn’t me.
Just to be clear, it’s not like I’ve been holding out all these years, waiting around for Mr. Perfect to ride in and sweep me off my feet. Nor did I take a sacred vow of chastity. It just kind of happened…or didn’t happen, as the case may be.
Know what’s even worse than that?
Wait for it…
Having the bad boy of the NFL, who also happens to be one of my brother’s teammates, offer to take care of that pesky little problem for me.