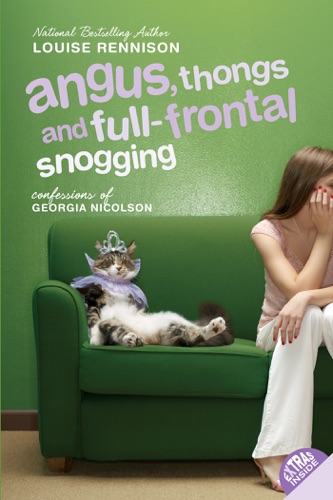 Angus:
My mixed-breed cat, half domestic tabby, half Scottish wildcat. The size of a small Labrador, only mad.

Thongs:
Stupid underwear. What's the point of them, anyway? They just go up your bum, as far as I can tell.

Full-Frontal Snogging:
Kissing with all the trimmings, lip to lip, open mouth, tongues ... everything.

Her dad's got the mentality of a Teletubby (only not so developed). Her cat, Angus, is trying to eat the poodle next door. And her best friend thinks she looks like an alien -- just because she accidentally shaved off her eyebrows. Ergghhhlack. Still, add a little boy-stalking, teacher-baiting, and full-frontal snogging with a Sex God, and Georgia's year just might turn out to be the most fabbitty fab fab ever!

Klopp by Anthony Quinn - The Inner Game of Tennis by W. Timothy Gallwey - The Putting Prescription by Dr. Craig L. Farnsworth - Coaching for Performance by John Whitmore - Open by Andre Agassi - The Mamba Mentality by Kobe Bryant - How to Build a Car by Adrian Newey - Zen Golf by Joseph Parent - The Art of Resilience by Ross Edgley - The Champion's Mind by Jim Afremow -