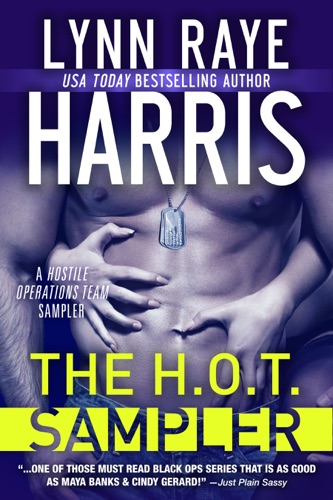 Book 1: HOT PURSUIT
When a HOT operative returns home on leave, he doesn’t expect to find himself embroiled in a kidnapping and murder. But if he wants to save the one woman he can’t forget, he’ll do everything he can to catch a killer before he strikes again.

Book 2: HOT MESS
When Georgie Hayes’s student goes missing, she turns to the HOT operative she’s loved since she was a teenager to help her solve the riddle. Sam McKnight will do anything to protect Georgie — but he won’t let himself have her, no matter how much she wants him to take what she’s offering.

Book 3: HOT PACKAGE
When Olivia Reese discovers a conspiracy to sell faulty equipment to the Pentagon, she calls former lover Billy “The Kid” Blake to help her expose the traitors and stop the deal. But Billy’s never forgiven Olivia for leaving — and he’s never stopped wanting her either.

Book 4: DANGEROUSLY HOT
The world’s most wanted terrorist is back from the dead…and only one woman can stop him. Kev “Big Mac” MacDonald can’t forget that Lucky is his best friend’s widow and therefore off limits. But when he has to pretend to be her husband for this mission, his control will be tested to the max.

Book 5: HOT SHOT
HOT sniper Jack “Hawk” Hunter once rescued pop star Gina Domenico from an arms dealer. Four years later, Gina’s son has been kidnapped and she need’s Hawk’s help. When he learns that her son is also his son, he’ll move heaven and earth to get the child back.

Book 6: HOT REBEL
When a rogue sniper blows Nick “Brandy” Brandon’s mission all to hell, he doesn’t expect his fate will soon be entwined with hers. He has history with Victoria Royal, but she’s working for the enemy now. Nick needs to be ruthless if he’s going to stop her. Much easier said than done when faced with her sweet curves and even sweeter lips…

Book 7: HOT ICE
When Garrett “Iceman” Spencer is sent to guard a senator’s daughter from terrorists, he doesn’t expect the pampered princess to get under his skin. But Grace Campbell is far more than she seems…and Ice’s cold heart is melting all too fast for his liking.