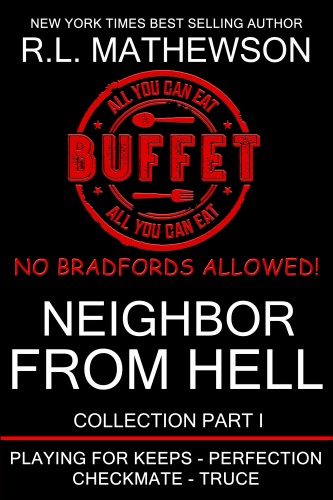 The collection of the first four Neighbor from Hell Novels: Playing for Keeps, Perfection, Checkmate and Truce

Playing for Keeps:
Done with being the world's biggest pushover, Haley decides that things are going to start changing. The first thing that she was going to do was to put a stop to all the crap that her aggravating neighbor put her through. What she hadn't expected was to be sucked into his world, but Haley has a game plan and she won't let herself forget what the bad boy next door is capable of.

Perfection:
Zoe is used to taking care of herself and has long ago accepted that if anything bad was going to happen, it was going to happen to her. So when she loses her job over something most bosses would probably be happy with and her life starts going down hill from there she doesn't expect it to get any better. She certainly didn't expect any help from the loud jerk next door, but then again she has nothing to lose so puts her trust in him and hopes for the best. What she didn't expect was the once in a lifetime opportunity that he offers her through an arrangement where they both benefit and no one is supposed to get hurt, but she should have known better because her luck has never been that good.

Checkmate:
There’s nothing worse than living next door to your childhood nemesis, except maybe being forced to share your dream project with him, being blackmailed into going along with something that was just wrong on so many levels, and having your hot cocoa stolen by the person that drove you to drink it in the first place.

As long as she has plenty of hot cocoa, a pair of pliers on hand and is able to resist Connor O’Neil’s bad boy charm then Rory James should be able to make it through this project with her sanity intact. If not…..

She’d probably face a few more nights in jail, have a few more restraining orders slapped against her and lose her heart to the man that ruined her life.

Truce:
Elizabeth knows what’s expected of her, perfection. She’s the daughter of an Earl and expected to marry well, say and do the right things with a smile on her face when inside she’s dying for a chance to escape. Thanks to an inheritance her godmother left her years ago, her chance will come with her next birthday. Her hopes of escape abruptly end when Robert, her childhood nemesis that she hasn’t seen in over fourteen years, comes back into her life and does everything he can to drive her out of her mind even as he steals her heart.